This year I wrote two fics for the Tolkien Reverse Summer Bang. Or, well, one and a half - I haven't finished the second one, and am still working on it, and I'm not even very happy with it. I had high hopes about being able to write more during the pandemic, since I'd be at home so much, but I am also super depressed, which is Not Fun and also not great for writing. (Plus, somehow I ended up with two art prompts that both tackle race - and the intersection of race, gender and fatphobia, in one of them - and these were heavy subjects that were somewhat draining to write about, even though they're so horribly, intimately familiar to me.)

Summary: When Glorfindel returns to Middle-Earth, he finds himself intrigued by Erestor, an Avarin immigrant in Imladris.

A collaboration created for the 2020 Tolkien Reverse Summer Bang | @tolkienrsb

Summary: After the battle comes the recovery. Lothíriel is reunited with her father and brothers in Minas Tirith, gains responsibilities, makes new friends, and meets Éomer of Rohan.

A collaboration created for the 2020 Tolkien Reverse Summer Bang | @tolkienrsb

(He's doing okay; she was fighting cancer for years and he knew this was coming.)

Quick visa update, which is necessary to explain the context of the rest of this entry: I have given up on the Migrant Visa, the one I'd been working towards up til now. It was just... ugh. Such a hassle. So many criteria to fulfil and work towards. Such a long and uncertain timeframe from now - once I had gathered everything to fulfil the insane criteria I'd first submit an Expression of Interest, and then wait around for months to be invited to apply for one of the limited number of Migrant Visa applications released per month. Then I'd have to wait for ages more for it to be approved, and it could still be denied.

So with Mark's full support I decided to switch to the Partner Visa, despite the reservations of my family and myself - because I do love and trust Mark wholly and we're going to get engaged, but then everyone loves and trusts their SOs and believes there'll never be an end and yet breakups and divorces still happen. :/ If for whatever reason our love soured and we broke up, given that my ability to stay in the country to work and live my life in our house with our cats depends on him, I would lose everything. So this was a really hard decision to make.

I'm in the process of applying for that visa now, and one of the preliminaries is filling out a LOT of information about my life and his, including the birth and citizenship details of our families (including siblings' spouses). It also wants information about previous de facto relationships, which means Mark's abusive ex, Hilary. It wants start and end dates of those relationships.

We're moving forward and I'm on the way to staying permanently in Australia, finally! \o/  Crossposted from Dreamwidth: https://sivaroobini.dreamwidth.org/91535.html.

I really, really ought to invest in a Frequent Flyer program. Also, I'm back in Singapore.

I'm tired and I just want this to be sorted so I can stay in Perth for more than a few months at a time, dammit.  Crossposted from Dreamwidth: https://sivaroobini.dreamwidth.org/91151.html.

Summary: Glorfindel returns to Middle-Earth. Settling into a new Age is not easy.

A collaboration created for the 2018 Tolkien Reverse Summer Bang.

Man, writing a fic about depression while I myself was depressed was... not ideal, and way too meta. I do not recommend it. :P

On one hand, Maedhros really hated Morgoth for everything he'd done to him.

Sadly the other hand was still in Angband.

... Yeah. Sorry not sorry. XD I think it's hilarious. Can't take credit, it's originally from Tumblr.

The first week of my practicum is nearly over. I have a lot to say about it, but that'll have to wait; I'm a bit snowed under with work at the moment, and tonight we leave for Pencampwr XIII!

This afternoon I was working on my essay on Autism Spectrum Disorder while the cats snoozed next to me, and in the living room Mark/

bpambberger and Avalon were having their weekly SCA singing practice.

I'd already spoken with Mark about joining them for the Mushroom Song, so he called me before they started; I set my laptop aside, made tea and joined them, and we had a great time practising it; we plan to sing it at Pencampwr, at either the Victory Feast or the Bardic Circle. We also discussed other songs (we've settled on also performing The Hunt Is On, and we had a laugh at The Wager). Anyway, after a fun practice I went back to the theatre to get back to work, and found this: 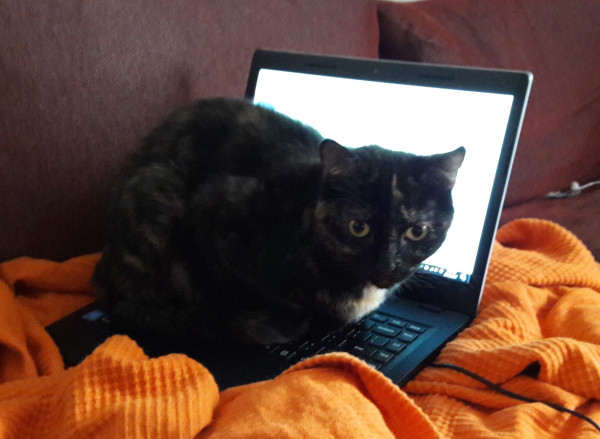 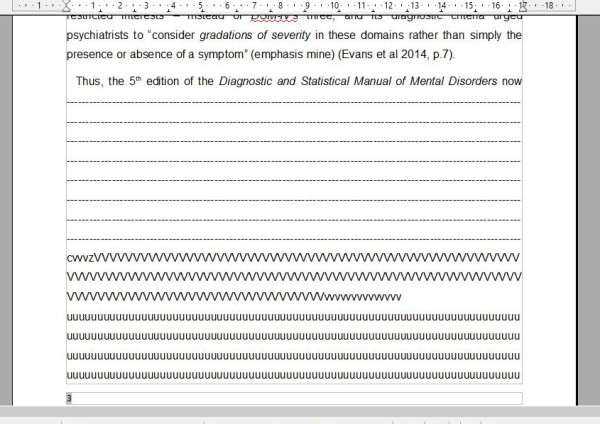 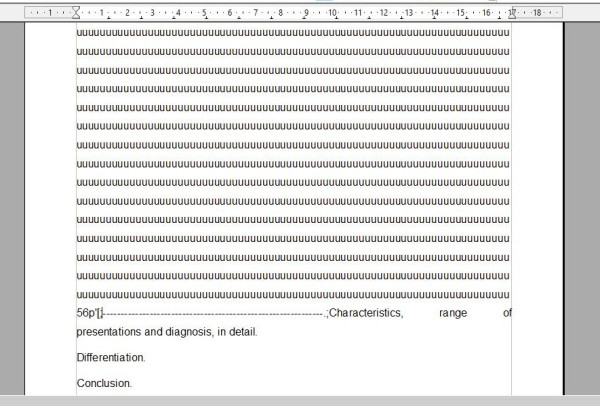 Could have been worse, I suppose. She could have had her paw on the Backspace button, or turned the entire laptop off. :P I love Bast dearly, but dear gods she gets into a lot of mischief. XD <3

For the past few weeks, my Facebook feed has been inundated with Mother's Day advertisements and offers. Looking at them is painful, and I scroll past as quickly as I can. Today I asked a friend if we could meet up on Thursday and he said no, he was working as much as possible this week since Mother's Day was coming and he wanted to have the day free to spend with his mother. I think I simply replied 'Ah' and closed the conversation; I should probably apologise to him and explain.

I've explained what's going on with my mother and my family in this post; basically I haven't seen my mother, who has Alzheimer's, since the beginning of January 2016 (when I only got to see her for like ten minutes in the doorway of a psych ward) and not for several months before that. We're still in the middle of very drawn-out legal proceedings to get her back from the scumbag, which he is of course doing his best to delay.

I miss her so much.

I'm living in Perth now, and when I set up my altar for the housewarming in February and texted my sister to ask about the proper rites and rituals, and referred to the instructions my grandmother had written out for me for the housewarming ceremony, I broke down and cried. My mother was very religious, and I really wanted to be able to turn to her. To have her instruct me and approve of my new oil lamp and bell and altar layout, to approve of what I'd done with furnishing and decorating the entire house and advise me on colours and what I should have in my kitchen, to perform prayers and sing hymns with me like we used to do every Friday night when I was a child.

(I mean, she wouldn't approve of me living with Mark when we're not married because she was immensely traditional, which we clashed over a lot when I was a teen, but that's a different can of worms which I don't think would have been insurmountable. I do think she'd have liked Mark, that aside. She liked him the one time she met him.)

And the thing is, even if we do get her back, my mum is gone. Oh, she's physically alive, but everything that made her her is likely gone by this point. The woman who raised me and took care of me and taught me and sacrificed for me, who loved me, is gone. She won't remember who I am, or my sister, or my father. She won't know why this strange woman is addressing her as Amma.

Sometimes I dream about home and my family, but in these dreams my family is whole, like some sort of alternate universe where my brother didn't turn out to be a sociopath. I dream that my mother is still with us, and she doesn't have Alzheimer's. I even have a brother, an actual brother, not a greedy vengeful piece of shit who tore my family apart. It often leaves me in tears when I wake up.

I love my life here, but I still wish that I could also see Mum when I Skype my family. I keep myself busy and occupied though, so most days I can live my life fairly contentedly provided I'm not reminded of all this.

So yeah, two days in the year are extra painful for me these days; Mother's Day, and her birthday (December 20th). Her birthday tends to sneak up on me though, which isn't so bad in some ways even if the day itself sucks. With Mother's Day, I'm getting these constant reminders that make me think of all the past Mother's Days I've spent with her and what I have to look forward to this Mother's Day. Bloody ads. 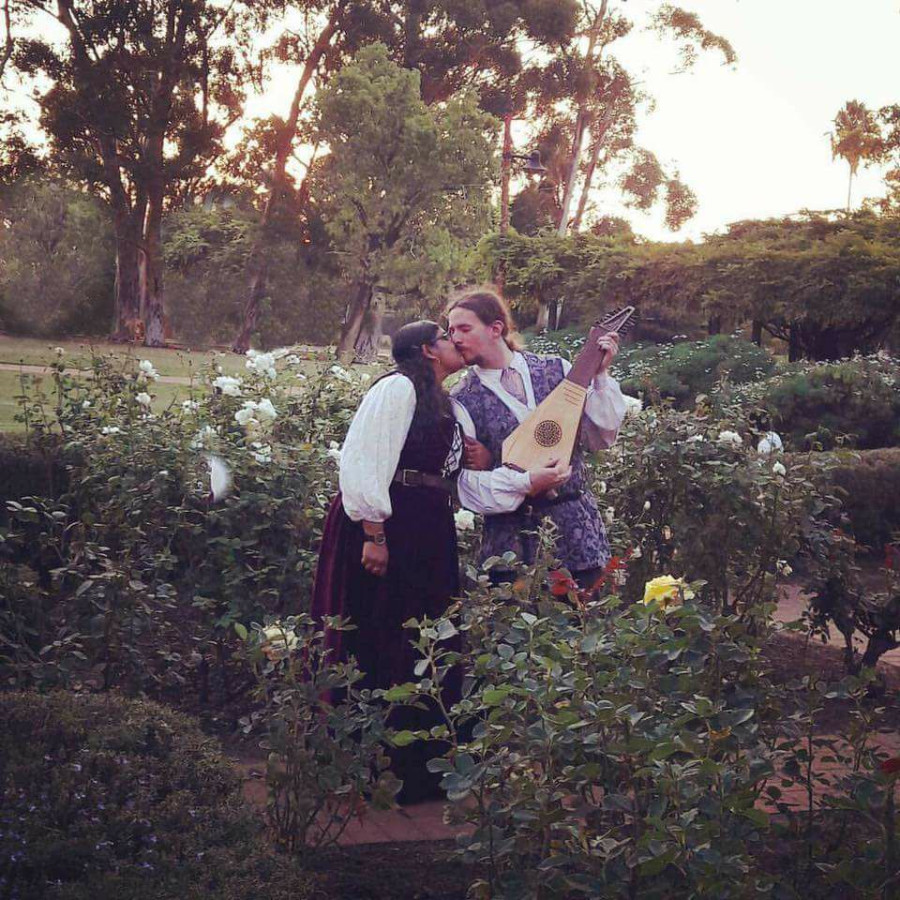 This photo of Mark and me was taken at the Barony of Aneala's 30th anniversary celebratory feast, and I love it so much. <3 In the original, you can see a truck and a house in the background, but a friend of mine got someone in a Photoshop group on Facebook to edit them out. :D

This is what's been going on in/ruining my life for the past few years. Warning: This post is really long. And this is the summarised version. I might explain the legal issues in another post, but writing this has been draining enough for one night.

There have been so many painful splits in my family over this and I have lost so many relatives I loved, knowing they chose him over us, and my family has shrunk so much. I haven't seen my mother in over a year now and I don't know if I will ever see her again, though I can only pray that by some miracle we'll win the court case and I will see her again, that Mark and I can kneel before her when we get married and my father will get the strength to go on; I don't know if he can, without her. That scum can keep all her money and assets, for all we care; we just want her back. And even then we'll basically get someone who used to be my mother but is now an unrecognisable being in my mother's body requiring round-the-clock care, but somewhere in there is my mother, and we can't stop fighting for her.